We explore what to see, do and eat in Ragusa

Forged by the earth’s forces and ancient civilisations, Sicily is a land which has remained relatively unchanged. The region of Ragusa is made up of 12 towns including Modica, Scicli and Ragusa, has 3 UNESCO World Heritage Sites, an incredible gastronomic scene and 17th century towns which demonstrate the pinnacle of baroque excellence. We give you just a snapshot of the region and what to see, experience and eat. 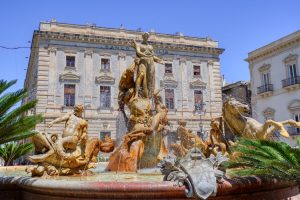 Discover baroque Sicily by train
Described as one of the most scenic railway journeys in the world, this train takes you on a voyage from Comiso in the southeast of Sicily to the tip of the island’s summit- reaching the dizzying heights of Mount Etna. A railway line that crosses seven UNESCO World Heritage Sites and forges its way through mountains and canyons, climbing over 16,000 feet as it does so, this train journey is a remarkable example of engineering. Tucked away at the head of the Ippari valley, the train journey begins in the sleepy 18th century town of Comiso before it heads to its first stop: Donnafugata, a castle and previous residence of Baron Arezzo. As the train leaves royal pleasures behind, Ragusa is the next main stop and the first to hit World Heritage status. Like many towns in the region, Ragusa was completely destroyed by the devasting earthquake in 1693 and was rebuilt in a dramatic baroque style. Split into Ragusa (old town) and the magnificent Ragusa Ibla (new town), the imposing church of St. George towers over both towns. The train then heads to Modica. Like Ragusa, it too rose up from the rubble and was branded with a World Heritage status. A town famous for producing chocolate, here you can satisfy your sweet tooth before crossing into the neighbouring region of Syracuse. In its heyday, Syracuse was the largest city in the ancient world, bigger than Athens and Corinth. Today you can still find the temple of Apollo and the Greek theatre which dates back as far as the 5th century BC and is still used today for the annual Greek Theatre Festival which runs from May until June. Clearly bathed in ancient history, Syracuse is the perfect stomping ground for historians and archaeologists. Dominating the skyline is the Duomo di Siracusa. From the outside it looks like a baroque façade but actually the building started life as an ancient Greek temple in the 5th century dedicated to the Goddess Athena. As Scilly was conquered, the temple became a church in the 9th century by the hands of the Normans and then a mosque by the Arabs and then once again a Roman Catholic church. To have three different religions worshiped on the same ground is just a snipped of the fascinating history of this island. The island of Ortigia, which can be reached by a footpath from Syracuse, is deeply enchanting and romantic. Try and catch the sunset – it’s spectacular. Leaving the glistening town of Syracuse behind, the train stops in Catania before it reaches the final stop of Mount Etna. A city full of grit and intensity which constantly lives in the shadow of Mount Etna, its layers of history run deep and can be traced back 3,000 years. 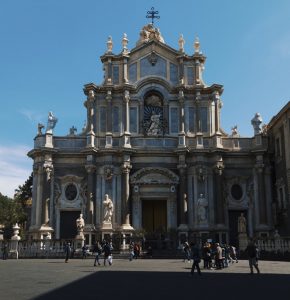 Planeta winery- Vittoria
One of five Planeta wineries in Sicily, the Dorilli estate in Vittoria was established by renovating a country home (which you can stay in), restoring the wine rooms and replanting vines. Split into two vineyards: Dorrili and Mogli, the two are cultivated only by the Nero d’Avola and Frappato grape.
Light red sand is abundant and leaves an aromatic cherry profile in Cersauolo di Vittoria wine which is produced here and is the first and only wine in Sicily to obtain the denomination of DOCG.

Chocolate- Modica
Antica Dolceria Bonajuto is the oldest chocolate factory in Sicily and is well into its 6th generation. Being part of the Spanish kingdom meant that Sicily was one of the first recipients of food imports from South America and chocolate was left behind in Modica some 500 years ago. This union was very important in establishing the chocolate as we know today and its generally agreed that Sicily was the first to introduce sugar to chocolate. The factory still makes chocolate as they did 150 years ago when it opened.

Provola Ragusana- Ragusa
One of the oldest cheeses produced on the island, Provola Ragusana is a semi hard cheese made with milk from the Modicana cow and part of the Slow Food Presidium.

UNESCO World Heritage sites
Apart from the honey-hued towns of Ragusa and Modica you can experience on the baroque train journey, Scicli is the third UNESCO World Heritage site in the region. Situated southwest of Modica, Scicli is authentic, up-and-coming, relaxed and like all other towns of the region, a showpiece of baroque style. The town makes regular cameos on the famed TV series Inspector Montalbano.

Where to stay:
Ortea Palace is a five-star hotel in Syracuse with 75 elegant and refined rooms and suites with fantastic views overlooking the port. Located in a magnificent building from 1920, known as “Palazzo delle Poste” on the island of Ortigia, the hotel is just a few moments from the best attractions, restaurants and shops of the city.
Complete with a fantastic spa and indoor pool, the hotel is a must for those who seek complete relaxation with the certainty that attention will be paid to every detail by the staff.

Tour of the Val di Noto. Part II: The Castles of Ragusa