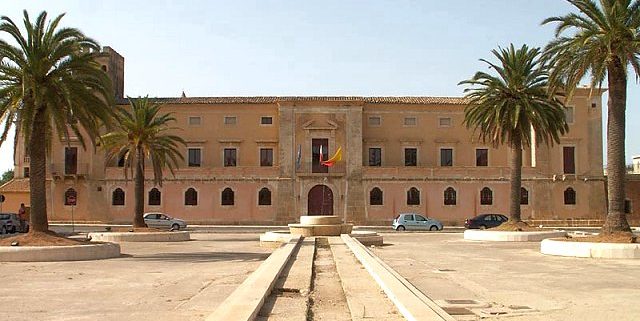 Castello Colonna Enriquez, Vittoria
The second most populated multiplicity after Ragusa, Vittoria is the youngest town in the province. The town’s womenfolk are still known to do intricate embroideries, first adopted during the period of Arab rule in Sicily. But it is wine that dominates Vittoria and has shaped the lives of those who have lived here for last 3,000 years. It is a land famous for cultivating Nero d’Avola and Frappato – the two important types of grapes found in Cerasuolo di Vittoria DOCG. The city of Vittoria is also home to the largest fruit and vegetable markets in Italy and is deemed the most important in Europe for tomatoes.

Castello Colonna Enriquez was partly destroyed by the terrible earthquake in 1693 that devastated most of the region. From 1816 to 1950, the castle was used as a prison. Abandoned for a few years, it was later restored to become the Polyvalent Civic Museum, named after prof. Virgilio Lavore, a distinguished Greek scholar. Today the monumental-architectural ensemble has been renovated, and a large room which was dedicated to the great Victorian painter Giuseppe Mazzone, is used for art exhibitions. The premise of the castle is currently being used as several museums, while the ground floor is the headquarters of the Vittoria Cerasuolo DOCG Wine Protection Consortium.

Castle of the Naselli d’Aragona, Comiso
Situated a few kilometers north-west of Ragusa and south-east of Gela, Comiso is less well known to outsiders but still has noteworthy historical monuments and pleasing vistas. Former heir of the ancient Greek colony Kasmenai, the remains of which are located at Cozzo di Apollo, a hill near the current-day city. Later, the population moved to what is now the city’s definitive location, near the Fonte Diana (Fountain of Diana), around which Roman-period ruins were found. The city was fortified, the urban layout developed, and the first churches were built during the Byzantine domination. After the subsequent plague of 1624 and the earthquake of 1693, a period of great architectural revival began for Comiso, with the construction of churches, and public and private Baroque-style buildings.

The construction of the Castle of the Naselli of Aragon in Comiso took place around the 7th century. Rather remarkably, the devastating earthquake did not cause significant damage to the structure. At the time of the Bourbons the castle remained abandoned until 1841 when part of it was transformed into a municipal theatre. Today there are the offices of the district court and the district prison in the lower part. On the right of the current building, it is still possible to admire the most historical part, represented by a baptistery containing several frescoes dating back to the Byzantine era. On the north side there is instead one 18th century loggia with further frescoes depicting landscapes and animals.

Castello di Donnafugata, Ragusa
Like every other town in the region, Ragusa was completely destroyed after the earthquake. Rebuilt into two towns Ragusa Ibla (the old town) and Ragusa Superiore (the new town), the two towns officially merged in 1927 becoming the provincial capital. While the upper part of Ragusa has its fair share of noteworthy attractions, it is the town’s predecessor Ragusa Ibla, that is quite spectacular.

Perhaps the most famous of castles in the region, Donnafugata which literally means ‘the woman who fled’ is located a short distance from Ragusa, deep in the south of Sicily. A treasure box waiting to be discovered, the castle remains an extraordinary example of Royal residency.As the name Donnafugata denotes romantic connotations, the history of the castle has resulted in many myths and legends, namely that Queen Blanche of Navarre, widow of King Martin I of Aragon, was hiding from Count Bernardo Cabrera who was courting her and hid at Donnafugata Castle. Rather disappointingly, most historians agree that actually that the name of the castle derives from linguistic corruption that originated from the Arabs. What we do know is that the building was bought by the noble Arezzo – La Rocca family in 1648 and the magnificent structure was built upon extensively throughout the 17th and 20th centuries by wealthy aristocrats who called it their home. The sumptuous abode boats more than 120 rooms with a luscious Mediterranean garden. Most of what you see today was completed during the 19th century by Sicilian politician Baron Corrado Arezzo who transformed the structure into a Neo-Gothic castle. The reason for this style was because at that time, Italian aristocracy looked to England as a leading example for architectural beauty and innovation. The baron was inspired by Hampton court and wanted to emulate Henry VIII in Sicily. In fact, he was so inspired that he decided to build a replica of the King’s aristocratic pastime- a labyrinth. Designed exactly like the one in Hampton Court but in stone rather than hedges, Corrado Arezzo was able to emulate Royal English pleasures in rural Sicily.

Castello dei Conti, Modica
Like most towns in Ragusa, Modica too rose up from the rubble of the devastating earthquake of 1693. An important Greek and Roman city in its heyday, Modica is now and has been for the past four centuries a custodian of a long Sicilian tradition of chocolate making. Being part of the Spanish kingdom for so many years meant that Sicily was often one of the first recipients of food imports from South America and cacao was one of them. Chocolate at that time was very bitter, historians agree that the union between South America and Sicily was very important in establishing the chocolate as we know it today as the island is thought to be the first to introduce sugar to chocolate. You can find chocolate factories across Modica, some in their fourth generation, making chocolate, slightly grainy in texture and often flavored with chili, cinnamon or vanilla, based on Aztec methods and recipes.

Located on top of a small mountain, the imposing Castello dei Conti, meaning the Count’s Castle, was for centuries, the seat of political power in Modica and remains to this day a visual emblem. The first construction of the Modica Castle dates back to the 8th century and was used by the Royal family as their residency and also for military and prison uses. The Castle of Modica also has a luxurious garden rich in vegetation and shrubs, including the citrus fruits of Sicily. Among the most common plants were Myrtle and Rosemary, considered at the time an excellent tool for air purification. The Castello dei Conti, as it stands today, is the result of a massive reconstruction that affected its structures not only after the earthquake, but, mostly, after 1779. Today the Castle includes the Ethnographic Museum, the Enoteca Storica Regionale, the Museum of Wine and Traditions, a permanent exhibition of the traditional Sicilian puppets (Pupi) and an exhibition dedicated to the sculptures of the Sicilian artist Nicola Rubino.

Tour of the Val di Noto. Part I: Noto