5 Reasons why you Should Visit Ragusa Ibla in Sicily

One of the major tourist attractions in Sicily (and the prettiest), Ragusa Ibla is set amid the rocky peaks, northwest of Modica. It is a fairy-tale town with labyrinths of honey hued houses, traditional trattorias and tangled medieval streets which spill onto squares of opulent baroque façades and churches. We give you 5 reasons why you should discover this treasure box in southern Sicily. 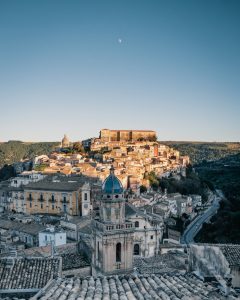 The baroque façades
The abundance of baroque façades has earned Ragusa Ibla the title of a UNESCO World heritage Site, deeming it a place of extraordinary excellence. After the devasting earthquake of 1693, Ragusa rose up from the rubble into two baroque towns: Ragusa Superiore (on the top of the hill) and Ragusa Ibla (way down below on a rocky crest). The church of San Giuseppe was designed by Rosario Gagliardi between 1739 and 1775 and remains a beacon of Sicilian baroque excellence.

The church of Santa Maria dell’Itria
The powder blue dome is probably the most famous image of Ragusa Ibla and with good reason. Founded by the Knights of Malta in the 17th century, Santa Maria dell’Itria has an original bell tower covered with Caltagirone ceramic tiles. Inside you can admire a canvas of San Giuliano, attributed to Mattia Preti.

Montalbano
Ragusa Ibla is the home to the much-loved Montalbano series. Many of the Vigata scenes are filmed in and around Ragusa Ibla’s Piazza Duomo, which is overshadowed by the impressive church of San Giorgio. Montalbano himself is a regular lunchtime client of Trattoria La Rusticana which poses as Trattoria San Calogero in the series. The overbearing Circolo di Conversazione, once a meeting place where the town’s gentry could chat, and drink, also features heavily in the series. The panoramic shots of Ragusa Ibla that set the scene for many of the episodes are taken from the Church of Maria delle Scale, which lies midway between Ragusa Superiore and Ragusa Ibla.

The Ibleo Garden
The recently renovated Giardino Ibleo – also called Villa Comunale – is the green plush garden of the city that overlooks the Irminio valley. Built in 1858, it covers over 15,000 square meters, containing impressive rows of palm trees and a great variety of beautiful plants and flowers- both Mediterranean and non-Mediterranean varieties. There are also three churches inside the Garden: San Domenico, the Capuchin church and San Giacomo, the latter was built on the remains of the temple of Lucina, the goddess of fertility.

The palaces
Plunging back into the atmosphere and the narrow alleys of the centre, you can see the overbearing palaces that dominated the skyline. Palazzo La Rocca features seven balconies, imposing sculptures and a wide opulent staircase. The heart of the town features the 16th century Palazzo Arezzo di Sanfilippo which houses an art nouveau gallery and the elegant Palazzo Arezzo Veninata. Palazzo Maggiore and Palazzo Majorana are also beautiful and evocative and belonged to Ragusa’s noble family.