We explore the history, legends, myths and childhood memories that surround this impressive river

Although we no longer view rivers as our primary source of survival the way our ancestors did, they still continue to draw humans. It alludes to two juxtaposing rituals which come together in a symbolic reunion. One being a reminder of our primal instinct that is part of our collective past- throughout history rivers were the main, if not, the only source for survival. Entire villages, towns and civilisations have been able to sustain itself because of water. The other is a more fashionable approach. They are destinations where tourists flock to, or a place of refuge from the summer heat.

Located east of Sicily, the Gole dell’Alcantara (Alcantara is of Arabic origin, al-Qanṭarah, and refers to a Roman bridge founded by the Arabs. Its literal translation means the gorge of Alcantara) is the most important river in Sicily for many reasons, and one being its perennial flow of water. Rising from the eastern sector of the Nebrodi Mountains known as Nebrodi Park, the source of the Alcantara river is located on the southern slope of the Serra di Baratta, at 1,250 meters above sea level near the village of Floresta (Messina). The source of the river can be reached after a fascinating and scenic route with views overlooking Etna and the Aeolian Islands. The total course of the river is 48km with an average slope of 2.3%.

To give you more of a precise idea of location, the river falls within two provinces: Catania and Messina and stretches across the municipalities of Floresta, Santa Domenica Vittoria, Mojo Alcantara, Francavilla di Sicilia, Motta Camastra, Graniti, Gaggi, Calatabiano, Taormina and finally flows to Giardini-Naxos where it meets the sea. 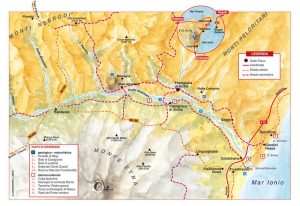 The Etna-Alcantara wine road gives an idea of the context between Etna and Alcantara and its rich production of wines.

The term Alcantara valley refers to a territory which indicates a very specific geographical area: the ‘catchment area’ of the Alcantara river, that is to say the surface of eastern Sicily that collects rainwater and snowfall that feed the outflow of the river. The physical boundaries of this basin flows to the north, on the ridges of the Peloritani, to the west, on the ridges of the Nebrodi, to the south, on the volcanic soils of Etna and finally, to the east, on the coast of the Ionian Sea. The water of Alcantara, already widely used for irrigation, is now also used for the production of hydroelectric energy which serves to supply energy to all of eastern Sicily.

The Gole dell’Alcantara is characterised by huge rough gorges, pockets of cool caves which give you a momentary respite from the scorching heat, cascading waterfalls, distinct ashen lava rocks with smooth and slippery surfaces and ice-cold waters. Even for the most frequent of cold swimmers, the temperature of the Alcantara water leaves an impressionable thumbprint in your memory, especially when you reach parts of the valley where the water is belly deep, causing a rash of goosebumps. You should be concerned at how cold the water is, but not enough to put you off entirely. All of this is wild beauty is over 1,200 metres down and in order to reach the most distinctive and popular part of the valley you need to pay a small entrance fee to the council of Motta Camastra and go down some 200 uneven steps, passing the overgrown prickly pears as you do so.

Rivers are often viewed as physical and in some cases, spiritual sources of sustenance, like all other well know rivers around the world, the Gole dell’Alcantara has, and will continue to serve its territory. The story of this valley is shrouded in a cloud of mythology and history that continue to inspire and beguile travellers. During the ti8me of antiquity, the formation of the Gole was personified as ‘the work of the Gods’ or to be more precise as ‘punishment from the Gods’. One legend tells the story of two peasant brothers, one of the brothers was blind, a good and honest man and the other was dishonest and a cheat, who at the time of the harvest, stole the wheat from his blind brother. The Gods were angered by this and struck a bolt of lightening that killed the dishonest peasant and turned the wheat into a mountain of brown earth that began to erupt so much lava that it covered the valley. It is also said that the waters that run through the gorges are so cold due to the resentment from the God Vulcan towards the goddess Venus who betrayed him. To take revenge for her infidelity, the god, who had previously heated the river for Venus as she loved to bathe there, made the waters ice cold as a punishment. Now of course these are only fictional accounts but does give the valley a rather charming backstory.

What we do know about the Gole is that the riverbed, the part where it meets Motta Camastra, dates as far back as 300,000 years ago. About 8,000 years ago the riverbed was blocked by a lava flow from Mount Etna. As the lava cooled much more quickly by the water than it would have done otherwise, it crystallised in the form of columns. Over the next millennia, the river naturally eroded a channel through these columns, resulting in impressive gorges and ravines which are huge in scale. It is precisely where the river meets Motta Camstra where you can find the most characteristic and impressive parts of the river. Here, you can also find a remarkable lava flow cave, difficult to reach but astounding to look at, called the Grotta dei Cento Cavalli meaning the cave of the hundred horses, which gives you an idea of its enormous size.

Putting history and archaeology aside, the Gole dell’Alcantara holds important memories for locals who spent many days of their childhood playing by the river. “My earliest memory of the Gole was probably in the early 60’s, I used to pass by there on my way to the land. At that time there was only a few cars on the dusty road, maybe some buses. Then in the late 60’s they built the stairs and an entrance which gave people access to the gorge and encouraged tourists to explore the area a bit more,” said one local who grew up in the nearby village of Motta Camastra. “At the age of about 12 or 13, I was spending more time there. I was a little guide for tourists and used to show them around. During this time,” – he continued, “there was a struggle for power as the territory started to bring economic prosperity. There was a shooting, but no one died. About 2 years later, in the early 70’s, a tragedy occurred where a bomb was put underneath a nearby house and unfortunately people died in that case.” Don’t forget this is Godfather territory here which is rather fitting as he told me this story. In roughly the same timeframe, Francis Ford Coppola filmed fragments of part I in the nearby villages of Motta Camastra and Graniti where Michael begins his courtship for Apolonia and also filmed scenes right by the main entrance of the Gole dell’Alcantara. The famous villa where the car explodes killing Apollonia is known as the Castello dei Schavi (Castle of the Slaves) which is located in Fiumefreddo.

Along with Francis Ford Coppola, other great directors chose Sicily and the Alcantara area as a backdrop in their films:

Even though the Gole dell’Alcantara is clearly popular among filmmakers and tourists which is why it becomes extremely overcrowded in the summer months, the river has never run the risk of becoming un-special. Rather magically it has managed to maintain its wildness and has well and truly earned its place as a natural phenomenon. 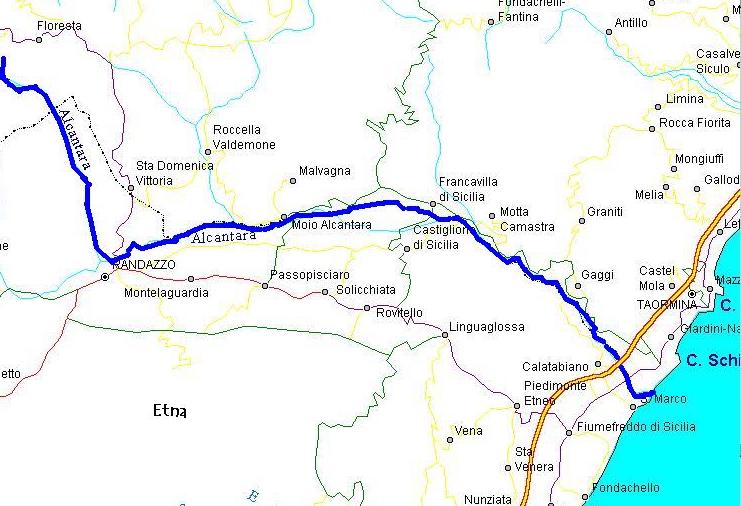 The path of the Alcantara River

The easiest way to reach the Gole dell’Alcantara is by car and is about 20 minutes drive from Taormina. The closest airport is Catania Fontanarossa which is approximately 50 minutes by car.

More from our Journal

The Wellness Travel Trend of 2021
Scroll to top